Before you really think about getting pregnant, it seems pretty straight forward. We understand how the birds and the bees work, and we have some general knowledge about what to expect once we do get pregnant (like morning sickness and having to pee constantly).

But all it took was a little bit of reading for me to uncover some interesting facts about pregnancy I would never have guessed. These things really surprised me, and I thought they may be news to some of you too!

So if you’re starting to think about growing your family or are just interested in learning something new, read on for these fun facts.

Note: I’m not a medical professional or fertility specialist of any kind! I just did a lot of reading because it was all new to me. These are just learnings that intrigued me, and I’ve sought to back up the findings in this post with research wherever I could.

On to the shockers!

#1. You’re not really pregnant until 6-12 days after conception…

This one really surprised me. I figured that once conception happens and the sperm and egg meet, BOOM – you’re pregnant. It turns out that pregnancy is actually thought to begin once implantation takes place, which is several days later.

You see, after ovulation (which lasts 12-48 hours), the fertilized egg begins a multi-day journey down the Fallopian tube (road trip!), with an ultimate goal of implanting (or attaching) itself to the wall of the uterus.

This implantation takes place an average of 9 days after ovulation, though it normally happens anywhere from 6 to 12 days following ovulation.

Once implantation has occurred, the blastocyst (what the embryo is called at this stage) begins to emit hCG, or Human Chorionic Gonadotropin, which is known as the pregnancy hormone. (This is what is detected by at-home pregnancy tests – the “pee-on-a-stick” variety.)

#2. …but by then you’re considered multiple weeks pregnant.

Yeah, I was confused too, and it still doesn’t make a whole lot of sense to me.

When it comes to calculating how many weeks pregnant you are, the general rule is to start counting from the first day of your last period. Some doctors refer to it as your LMP, or last menstrual period.

Let’s assume you have a 28-day cycle and you get pregnant.

You then miss your period 2 weeks later which is CD 28.

Yes, this is despite the fact that implantation likely occurred around CD 23, in which case you would only have had an implanted, fertilized egg in your uterus for 12 days, or a little under 2 weeks.

Baby Centre How is a Pregnancy Due Date Calculated? Article

#3. Conception can happen on a day without sexual intimacy.

Sperm can live inside a woman’s body for up to 5 days. And ovulation lasts 12-48 hours.

So if you and your partner are intimate on a Friday and ovulation doesn’t take place until Monday, that Friday sperm may lead to conception once ovulation occurs. That would have your date of conception as Monday, despite there being no intercourse.

#4. Not all pregnancy tests are equal.

As I mentioned above, pregnancy tests detect the presence and level of hCG in your system. Some tests can detect hCG at a lower concentration, meaning they can detect pregnancy earlier than others.

First Response Early Result tests are known as being the most sensitive, and can detect hCG at concentrations as low as 6.5 mlU/ml (Source). Other tests, however, often need levels to be much higher – 25-50 mIU/hCG and up.

In early pregnancy, your hcG levels are doubling every 72 hours (Source) so it doesn’t take too long for them to increase quickly and then be detected by less sensitive tests. But it’s still worthwhile to know that they differ, especially if you start with a less sensitive test and get a negative result.

(If you’re looking to test often, grab a multi-pack of test strips like the Easy @ Home Strips from PreMom on Amazon – they’re really good value!)

#5. You only have roughly a 20% chance of getting pregnant each month.

Whoa, Nelly – way to demoralize us over here.

I’m not sure about you, but I thought the chances were much higher.

This article from The Bump quotes figures I came across in my reading – in couples who are at the peak of their fertility, the chances per month of conceiving are about:

A few things to cheer us up, though:

First, a 90% chance within the first year of trying is high. And there are steps you can take to track things and improve your chances of conceiving, if it’s a high priority for you and your partner.

Second, 20% is still one in five couples, which sounds more glass-half-full.

And third, it’s an indication not to get overly discouraged if it takes several months or longer.

So did any of these facts surprise you? Have you uncovered any other weird truths over the course of your research? I’d love to hear them!

Our Pregnancy Story: How We Found Out

What Pregnancy Has Made Me Grateful For

How to Involve Your Partner in Your Pregnancy

My Top 8 Pregnancy Essentials for the Second Trimester 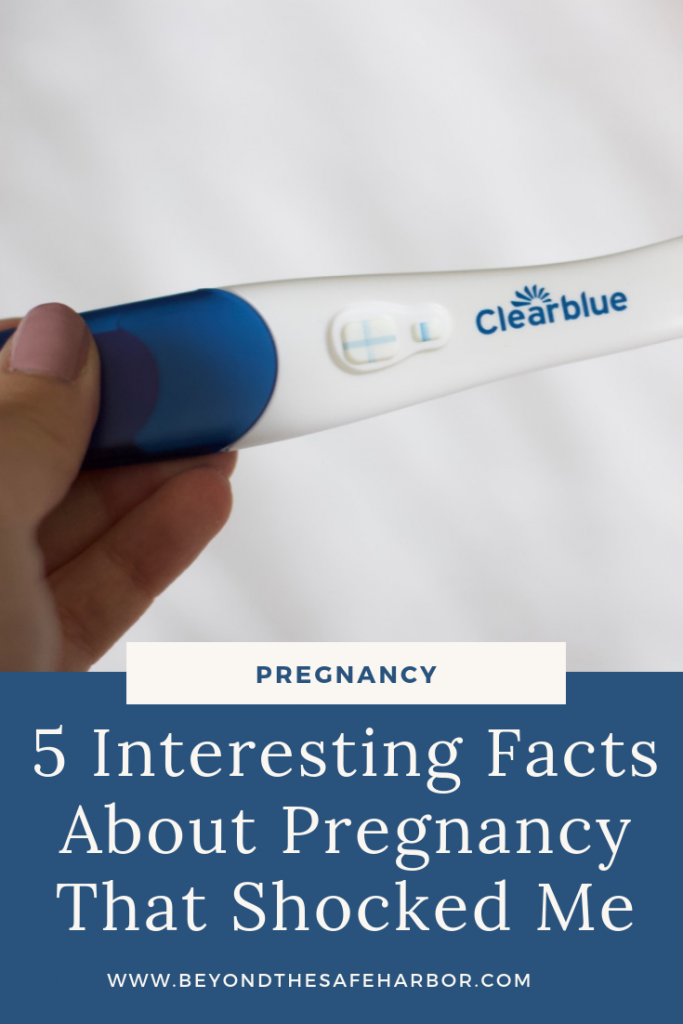