According to an article in Psychology Today, we experience five hours a week of guilty feelings. FIVE hours! It’s no wonder that guilt can weigh on us and seriously impede our productivity, positivity, and overall mindset. But how can we start letting go of guilt? And freeing ourselves from its hold? Today I’ll be sharing with you how I’ve begun to do just that.

When I first decided to leave my corporate job to pursue self-employment, it was under the assumption that my fiancé and I were not planning on buying a house in the near future. We’d be buying a house in the suburbs which would mean him commuting to work, and both of us being further away from friends and family. It didn’t seem to make sense to commute every day before we really needed the space.

We had both become increasingly antsy living in a tiny condo without much green space nearby, sharing a cramped bathroom every time we needed to get ready at the same time, and dealing with loads of pedestrian and street traffic. While Toronto is a great city, both of us are from smaller towns and didn’t see a future there, especially once kids are in the picture.

We decided to look for a home outside the city in a family-friendly suburb. Although we were going to be saving money versus buying a house in the city, we’d be spending more than we were as renters, and that was going to be an adjustment.

It took only a few minutes of adjusting our budget for the guilt to set in.

My decision to leave a steady, well-paying job meant that not only that I’d be contributing less to household expenses. Now it also meant that my contribution would be a smaller percentage of the budget than before. I began feeling like a weak link, dead weight, and a total hanger-on.

You see, as an only child, I’ve always been incredibly independent and the thought of not contributing my share or pulling my own weight was crippling. Yes, I was excited to be starting a new chapter and to start planting roots in a new community. But I was also overwhelmed by feeling I wasn’t bringing enough to the table. I had chosen a path that felt incredibly selfish – choosing my passion and dreams over the “responsible” route of taking the road more travelled.

I want to make it clear that I don’t think financial contributions always have to be equally split in a relationship, and I would never judge people for their choices. It was just that for me, the shift from contributing a lot to contributing a little caused me a lot of guilt. Especially since it was my decision to leave my corporate job and take a pay cut in the first place.

Thankfully, over the past several months, this guilt has eased due to three powerful shifts in perspective. Taking these to heart can help in letting go of guilt like it did for me.

I spoke to my life coach one evening about the home buying journey, and she picked up on my guilt instantly. From our work together she knew my core values of Responsibility and Integrity were being challenged, and could tell that I was struggling with feeling like I wasn’t living in alignment with what matters to me.

Her advice was to look at what I AM bringing to the table in my relationship with my fiancé. Contributions aren’t always financial, and there are so many other ways to contribute to a relationship.

It didn’t take long for me to realize all the things I had been doing which added value to his life:

These things had all become possible because I work from home, and while they may seem domestic or insignificant, they are the small things that add up to big things like more quality time spent together when we’re both home.

With this in mind, give some thoughts to the things you are doing and contributing in the area in which you feel guilt.

Shift #2: Look at the Bigger Picture

Another thing that’s helped is reminding myself of the bigger picture and what my decision to pursue my dreams really means.

Ideally, blogging and creating a platform around it will let me share my learnings, insight, and advice to help and inspire others. It will enable me to work from any city, and be at home with my kids when they’re young. It will give me the financial freedom to avoid having to return to the corporate world so that I can continue devoting my time and energy to helping others.

Taking another step back, deciding to pursue my passions is aligned with what I value and how I strive to live each day. Leaving my comfort zone to do something I believe in is too important to disregard out of guilt.

Take a look at what your bigger picture is and how your choices fit into it. Are your actions aligned with the person you want to be? Is what you’re choosing to do one key step in the larger path you’ve decided to take?

Shift #3: Recognize that the Guilt is Your Own

Lastly, I had to recognize that the negativity I was feeling about my contributions was mine alone. My fiancé has always been fully supportive of my decision to pursue self-employment. We’ve had many frank discussions about finances, and he is aware and comfortable with the fact that my contributions won’t be as high in the early months. He is fully aware of how hard I’m working to make my dreams a reality and doesn’t harbour resentment towards my decision.

Reflect on this for your own situation. Is your guilt your own? If so, how can you give yourself permission to let it go?

While guilt is near impossible to eliminate completely, key shifts like seeing contributions in a new light, looking at the bigger picture, and recognizing that guilt is your own can be game changers. Give yourself permission to let go of any remorse you’re hanging onto. It will do you a world of good and enable you to force ahead with more freedom and peace.

Have a tip of your own for letting go of guilt? Leave us a comment below! 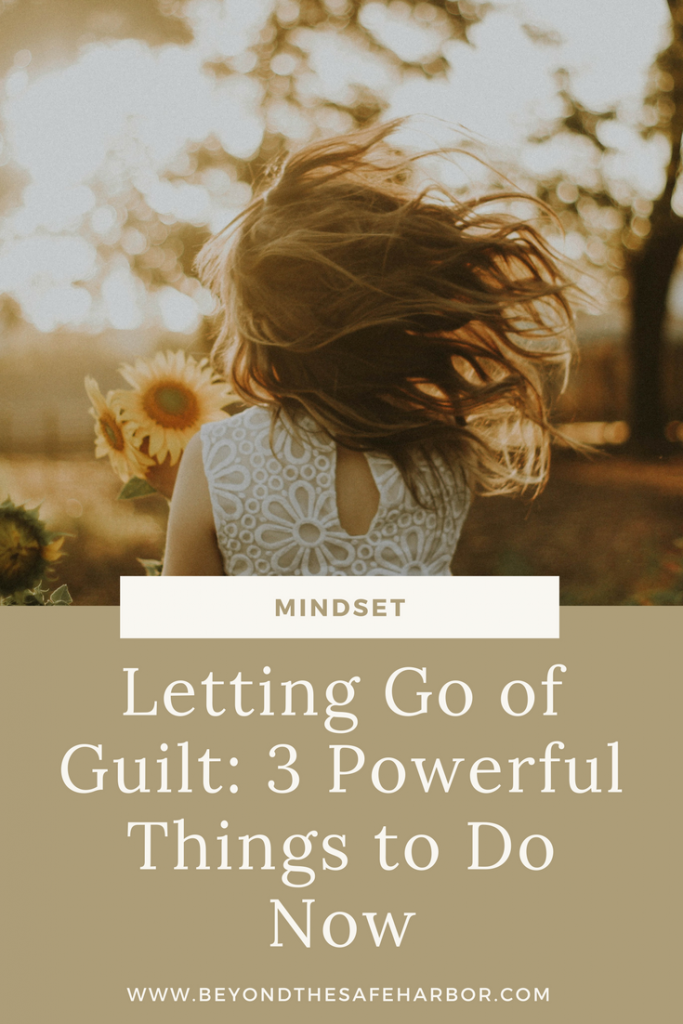 « How to Make a Difference (in a Big Way!) This Year
Why You Need Multiple Sources of Income Right Now »