While I love sharing every blog post I write, this one is particularly special. As I shared on social media this week, my husband and I are expecting our first child in April 2019! It’s been an incredible journey so far, and we’re filled with so much gratitude and excitement. 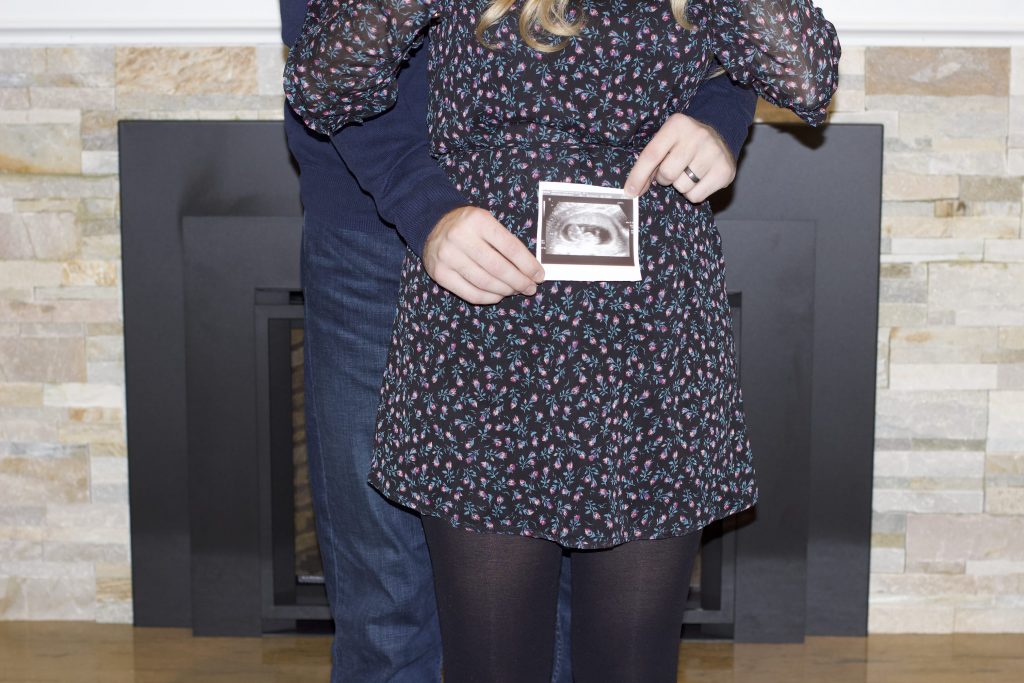 We don’t yet know the sex of the baby, but we plan to find out. We’ll probably know by mid-December. (This is the #1 question we’ve been asked!)

I plan on sharing as much helpful information as I can along the way, from interesting pregnancy facts and what helped me with morning sickness to pregnancy essentials for each trimester, and how to involve your partner in your pregnancy.

To start things off, I thought I’d share our pregnancy story: how we found out we had a bun in the oven.

How I Found Out I Was Pregnant

My husband and I got married late May of this year, and always knew we wanted to start a family afterwards. It wasn’t a huge rush, but we also weren’t waiting on any key factors before having kids. We’ve been living in a 4-bedroom house since last Fall (so we have the space!), we’re in a good place career-wise, and our relationship has never been stronger.

Once we got back from our honeymoon in June, we were open to getting pregnant, but didn’t put a lot of pressure on ourselves for it to happen quickly. I started to get a sense of my cycle timing, so that I’d know at what point it would make sense to take a pregnancy test.

(Side note: pregnancy tests can get EXPENSIVE, so if you’re planning on testing a bunch, buy a bulk pack of strips like these that cost less for 25 tests than for 3 First Response Early Response tests! The dollar store also sells them, and they are supposedly just as accurate as drug store tests.)

One night in late August, I had a vivid dream that I was pregnant.

In my dream, I took several pregnancy tests and each one came back positive! As soon as I woke up the next morning, I knew I had to test. I was pretty sure that if I was pregnant, it would be detectable by that day, so it was worth checking.

So I got out of bed at 6:30am that Sunday morning, and tiptoed to the bathroom to take the test. I took a First Response Early Response test since they can detect pregnancy earlier than others.

Almost instantly, a thin line started to appear where the test line should be, and my heart stopped. I couldn’t believe it was happening – it felt too soon and too good to be true. The line seemed to  start to fade and I spent the next 3 minutes nervously waiting to see whether the line would stay.

After 3 minutes, it was a clear positive (the test line on the left is faint, but visible!).

This is the picture I took, hands shaking, at that moment of shock. 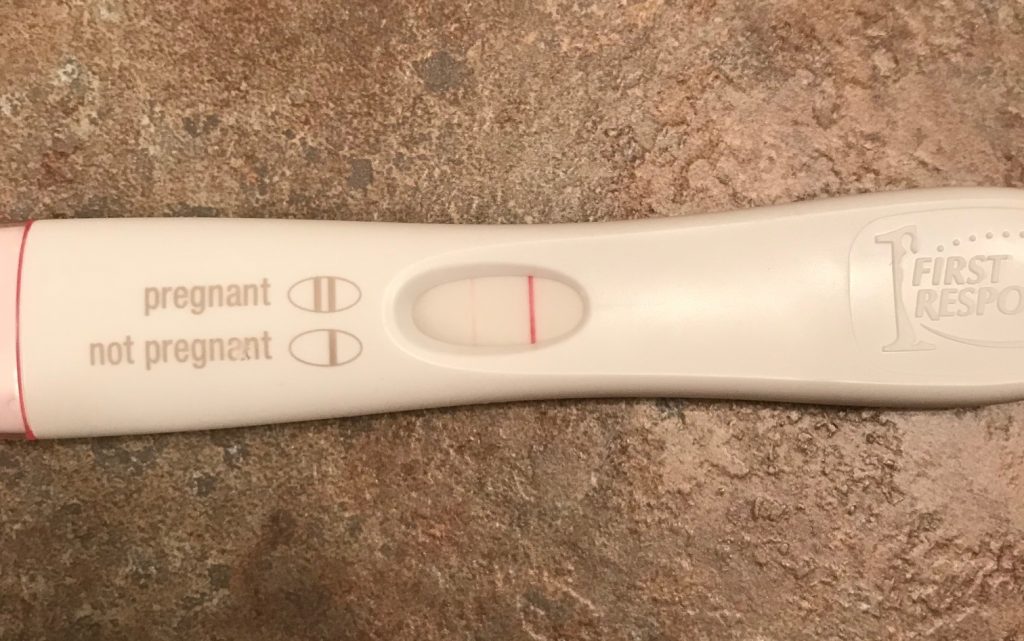 How I Told My Husband

I grabbed the test stick and ran back to bed. My husband was sleeping and while I considered letting him sleep, I was too excited to not tell him.

He was excited but obviously a little disoriented since I woke him up so early to tell him the news. I also think he was half expecting me to be throwing up or showing any other symptom of pregnancy for it to “feel” real.

We both wanted to be sure it was a true positive, so I took another 3 tests from 3 different brands. They were all positive, though you can see that the two middle tests are very light, with one of them almost not noticeable. (I also took these pictures in pretty poor lighting!) 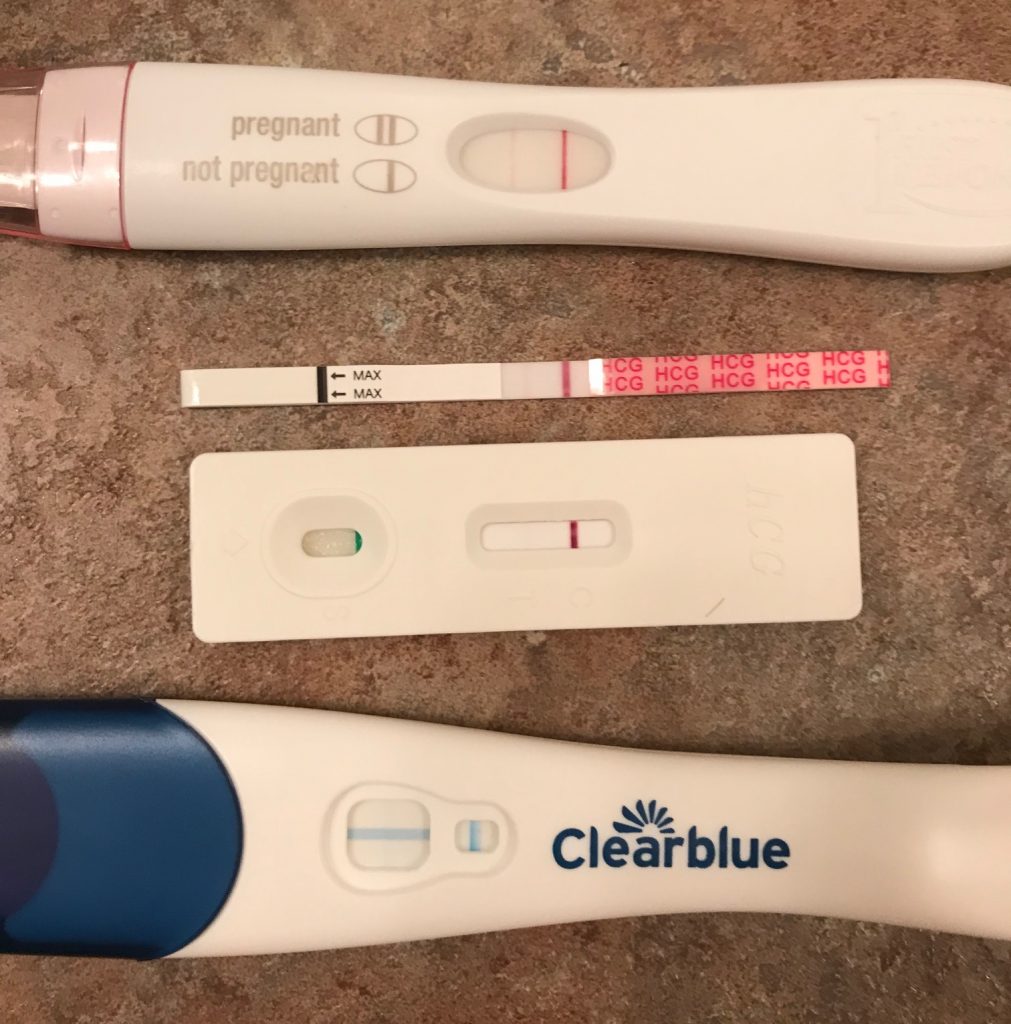 Pregnancy tests detect the level of hCG (human chorionic gonadotropin) in your system so any line on a test indicates that yes, there is hCG present. Over time, as you become “more pregnant”, your hCG levels rise. The test lines would darken accordingly to show a higher concentration of hCG in your system.

So these tests confirmed that I was, in fact, pregnant, but very early on.

Confirming the Pregnancy Through Blood Work

I wasn’t really sure what to do next. I read that I should either call my doctor or have the pregnancy confirmed through a blood test. (Note that I’m Canadian, so our health care system differs quite a bit from other countries, especially the U.S.)

Since I wasn’t sure if my doctor would see me without a confirmed pregnancy, we went to a walk-in clinic to get a requisition for blood work. We were able to find a clinic and a test lab open on a Sunday, and got everything done.

I’m pretty sure I was WAY early at doing these things. (And should we get pregnant again, I would probably do things differently.) I was just so excited and figured that since I would need to get the blood test anyways, I might as well go that day.

(We were also planning on visiting my parents a few days later, and I wanted to have my pregnancy confirmed before telling them!)

Two days later, my doctor confirmed that I was pregnant! My levels were quite low, likely because it was so early. So she asked me to get blood work taken again that day to confirm my levels were increasing properly. In a normal pregnancy, hCG levels should double every 48-72 hours in the early days, so getting my levels 2 days after the first test would indicate whether the pregnancy was still viable.

I got the blood work done and was actually able to check my results online. They showed that my levels more than doubled since the first test. This was a positive indicator!

A few days later, my doctor received the results and was pleased, but wanted me to do one final blood test before our first prenatal appointment. I did that test which showed a healthy increase in hCG levels and confirmed the pregnancy was still viable.

Since then, I’ve had 3 prenatal appointments, 2 ultrasounds, and done a whole bunch of blood tests including genetic testing. Everything has gone smoothly, and it’s been exciting to see the progress. At our 12-week ultrasound, the baby actually looked like a baby and it was incredible to see. We’ll hear the heartbeat at my next prenatal appointment (tomorrow!) and we can’t wait.

Overall, the pregnancy has been going really well and I’ve been in a really positive mindset almost every day. Yes, I’ve had some nausea, fatigue, food aversions, round ligament pain, and trouble sleeping. But it could be much worse and the gratitude FAR outweighs the symptoms.

There’s so much more I could write about, but I’ll save it for other pregnancy-related posts. That being said, I’d love to hear what types of posts you’d like to read! Leave me a comment below and let me know.

Thanks so much for reading until this point and for all the love and support! I can’t wait to share more of my learnings from this journey with you.

5 Interesting Facts About Pregnancy That Shocked Me

My Top 8 Pregnancy Essentials for the First Trimester

What Pregnancy Has Made Me Grateful For

How to Involve Your Partner in Your Pregnancy

My Top 8 Pregnancy Essentials for the Second Trimester 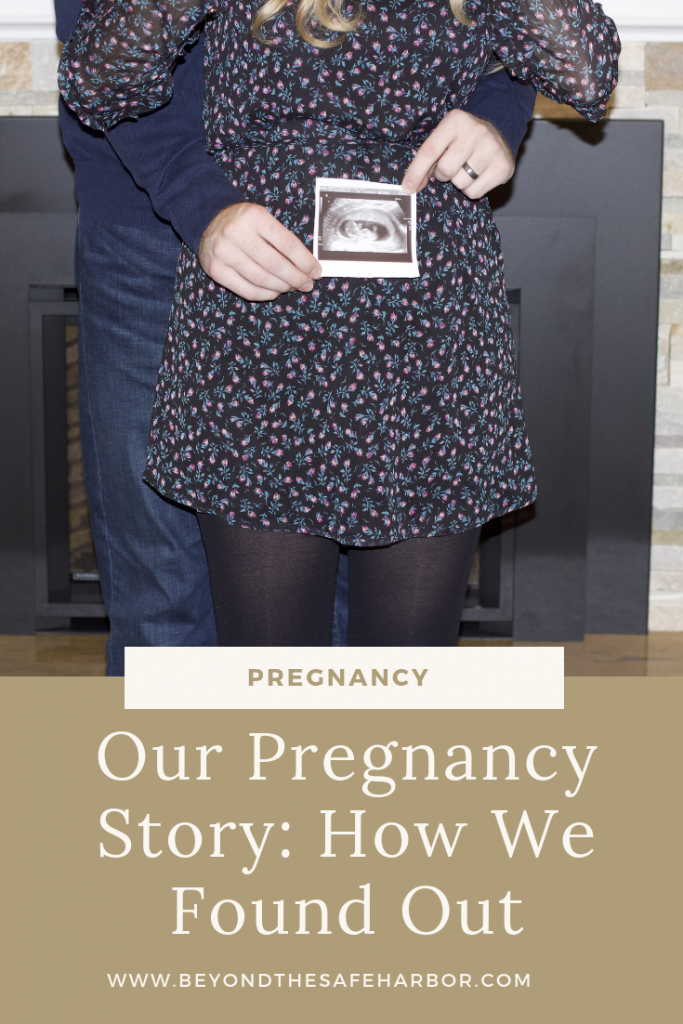 « Did You Get Featured? 5 Things to Do Now
Imposter Syndrome Quiz: How to Tell If You Have It »