Would you consider yourself to be a curious person? Do you ask a lot of questions or naturally wonder about things? Or do you typically go with the flow, trying not to rock the boat?

It can be easy to fall into the pattern of the latter. Asking questions and challenging things can feel like more trouble than it’s worth. And it can seem like a big waste of energy to try to change things.

But what about the times when curiosity pays off? When it’s a good thing and leaves you (and others!) better than before?

Here are three reasons why it pays to be a curious person.

You may change the outcome.

A few months ago, my Etsy shop was accepted into a group sale. This meant that my shop would be part of a larger promotion with fantastic exposure, bringing more awareness and revenue.

One of the conditions was that shops didn’t participate in a similar group sale two weeks before or after. I figured that this was because they wanted to ensure that no shops were “hogging” all the opportunities.

This wouldn’t have been a problem except for the fact that my shop ended up getting accepted into an larger group sale that was to fall 2 weeks later. This one would bring even more new customers and sales. Ideally, I’d participate in both! But I was worried that I couldn’t.

I figured I had nothing to lose by asking, so I reached out to the lead of the first sale. It turns out that the reason they made that rule was because they didn’t want shops to be so overwhelmed with orders that they couldn’t fulfill them. This would give the broader group sale a bad reputation. Who knew! I clarified that I’d be adhering to my guidelines of shipping out orders within 5 days of receiving them. They said it was totally fine for me to participate in both and appreciated me asking.

If I had taken the rule at face value, I would have missed out on a big opportunity for my business. But by inquiring, I was able to get a desired outcome.

You may learn something new.

One of the other takeaways from the last example is that asking leads to learning. While I thought I knew the rationale for the rule, it turned out I was wrong. This gave me more insight into some of the challenges of group sales and what considerations those running them have.

Another great example relates to a new freezer we bought. I ordered it from Costco, but it arrived with a dent in one of the front corners. We hadn’t unboxed it until we had moved it to the basement and given Costco offered a partial refund, we were hoping to keep it. At the same time, we didn’t want to hang on to something that wasn’t functional.

I reached out to the manufacturer and he looked at photos of the damage. He was able to assure me that the location and type of dent shouldn’t impact the performance of the freezer since they have done testing on different types of damage and that type passed. He had nothing to gain by saying this, since Costco would have been the one to deal with the return and likely caused the damage in the first place.

By simply asking, I got information straight from the source and we decided to keep the freezer, saving us time and money.

You may challenge others.

Asking insightful, well-thought out questions can also challenge others. Have you ever had a friend or family member ask you a question that made you pause? Maybe it made you think about things differently. Or question a belief you held.

Questions are powerful and asking them can help others better explain themselves, think through things, and perhaps even get a better perspective.

For example, recently I was at a Meetup with other women where the discussion was around guilt. I was sharing how I often feel guilty that I’m able to pursue my dreams and goals but that I’m not contributing to the household expenses as much as I would like to. One of the women asked me if I’d expect my fiancé to feel guilty if, down the road, my business took off and he got to stay home. Of course I wouldn’t! I’d be thrilled! This made me think differently about the role my business plays and alleviated some of the guilt I was experiencing.

So the next time you consider keeping your mouth shut and going with the flow, remember these reasons. Curiosity can unlock new opportunities, teach you something, and improve your mindset. And there’s no question (pun intended!) that’s a good thing. 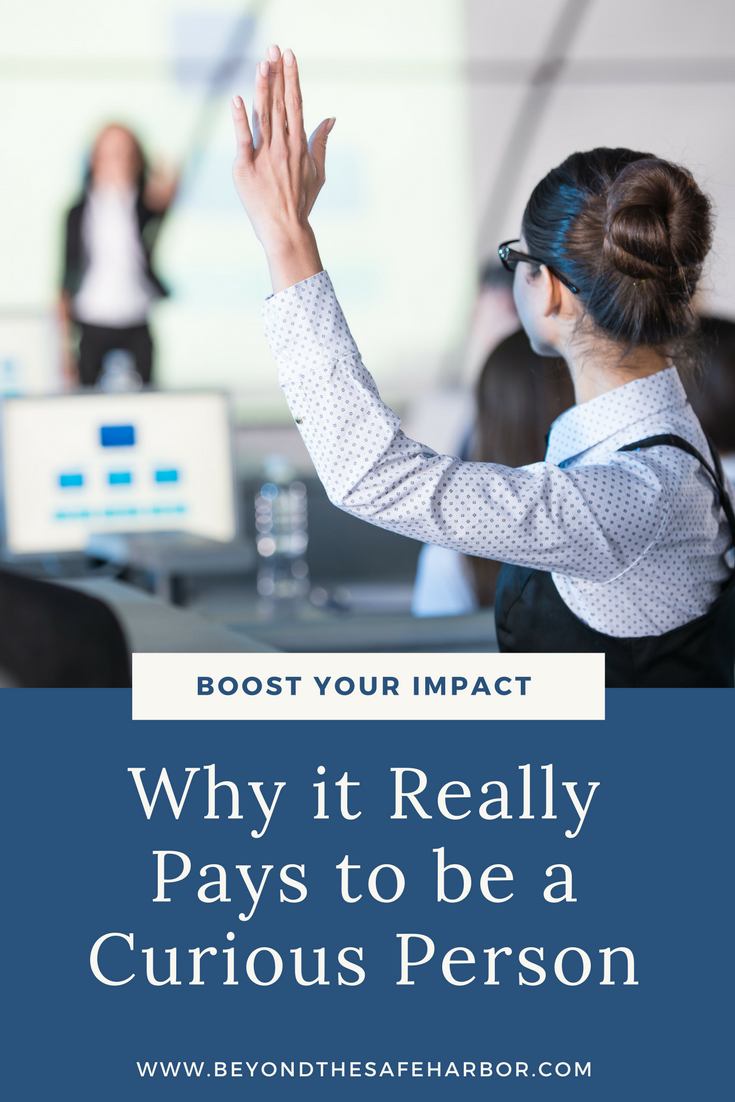 « Start Your Day Right With These Great Morning Habits
How to Make the Most of Your Holiday Gifts: 4 Easy Ways »